Rule 801- Definitions That Apply to This Article; Exclusions from Hearsay

The following definitions apply under this article:

(a) Statement. “Statement” means a person’s oral assertion, written assertion, or nonverbal conduct, if the person intended it as an assertion.

(b) Declarant. “Declarant” means the person who made the statement.

(1) the declarant does not make while testifying at the current trial or hearing; and

(2) a party offers in evidence to prove the truth of the matter asserted in the statement.

(d) Statements That Are Not Hearsay. A statement that meets the following conditions is not hearsay:

(1) A Declarant-Witness’s Prior Statement. The declarant testifies and is subject to cross-examination about a prior statement, and the statement:

(A) is inconsistent with the declarant’s testimony and was given under penalty of perjury at a trial, hearing, or other proceeding or in a deposition;

(B) is consistent with the declarant’s testimony and is offered:

(i) to rebut an express or implied charge that the declarant recently fabricated it or acted from a recent improper influence or motive in so testifying; or

(ii) to rehabilitate the declarant’s credibility as a witness when attacked on another ground; or

(C) identifies a person as someone the declarant perceived earlier.

(2) An Opposing Party’s Statement. The statement is offered against an opposing party and:

(A) was made by the party in an individual or representative capacity;

(B) is one the party manifested that it adopted or believed to be true;

(C) was made by a person whom the party authorized to make a statement on the subject;

(D) was made by the party’s agent or employee on a matter within the scope of that relationship and while it existed; or

(E) was made by the party’s coconspirator during and in furtherance of the conspiracy.

The statement must be considered but does not by itself establish the declarant’s authority under (C); the existence or scope of the relationship under (D); or the existence of the conspiracy or participation in it under (E). 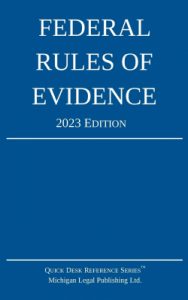